I’m working on a platform upgrade from Koa to Nutmeg. Both the MySQL and MongoDB data imported to the new platform without any unexpected problems. However, the courses do not appear in Studio nor anywhere in LMS except the unauthenticated landing page; in which case the course cards render perfectly but i get 404 errors if i click on any of them along with a Python error in the lms log, “openedx.core.djangoapps.content.course_overviews.models.CourseOverview.DoesNotExist”. On a slight sidebar, i did this same project a week ago for another client, albeit upgrading from Maple rather than Koa, and everything went smoothly.

Additional details about this Koa to Nutmeg upgrade: 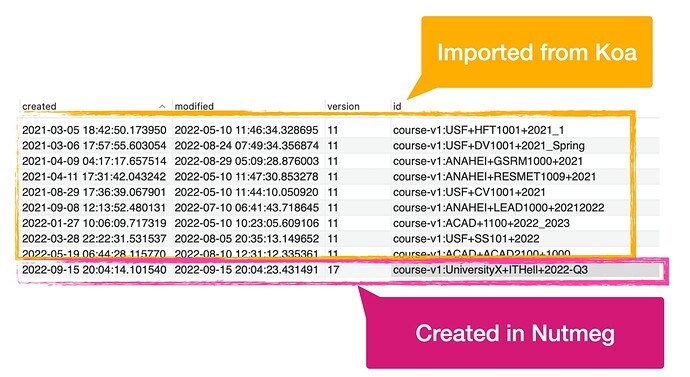 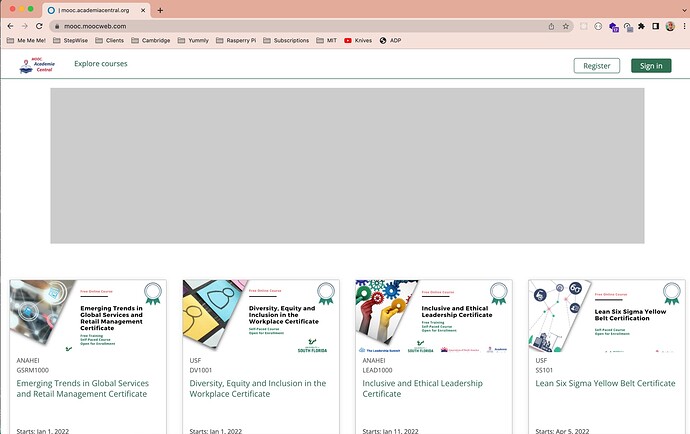 @lpm0073 I am not a 100% sure about it, but did you run the simulate_publish command for Learning Sequences as specified on this URL?

@lpm0073 My current Production system which is still running Koa Native has most courses (except 3 which are still at version 6) at version 11.

My current Test system which is based on the same Production system but running Nutmeg Tutor has most courses at version 17 (except 2 that stayed at version 6).

I did do a migration from Koa Native to Koa Tutor to Lilac Tutor to Maple Tutor and then to Nutmeg Tutor without skipping a step and looking at potential Feature Changes for each release as mentioned in the previous post.

thank you @sambapete, this clearly is part of the solution, however, i still haven’t figured out the correct sequence, or if perhaps there are additional steps. what i’ve done so far:

There seems to be some other interim step. Any ideas? Thanks again for your help!!

I ran the sumulate_publish command right after migrating from Lilac to Maple.

Remember that I did go from Native Koa to Tutor Koa then Tutor Lilac then Tutor Maple and then Tutor Nutmeg in that order, not skipping any versions. I did migrate MySQL and Mongo directly from Koa Native to Koa Tutor.

Could this be the difference? Are you going straight from Koa Native to Nutmeg Tutor?

Seems like that might be the case. I’ll look for documentation on going from Koa native to Koa Tutor, to investigate whether something is happening in this step that bumps the course versions.

It could also be the steps in-between versions.

I remember seeing somewhere that it was recommended to first migrate from Native to Tutor on the same release. Maybe it was during a discussion I had with @regis or @BbrSofiane.

what documentation did you use for this step, from Koa native to Koa tutor?

Well, actually – just thinking out loud – i guess i could just build a generic installation of Koa on tutor and then import my course content. The MySQL data for this particular project appears to already be working as expected on Nutmeg and so i guess i could mostly ignore this at this stage.

That’s exactly what you need to do. You probably already know all of the steps.

What I did was mostly based on what @BbrSofiane wrote in late 2021
https://openedx.atlassian.net/wiki/spaces/COMM/pages/3249438723/How+to+migrate+from+a+native+deployment+to+a+tutor+deployment+of+the+Open+edX+platform?focusedCommentId=3337453635#comment-3337453635

i’m grateful that @BbrSofiane took the time to publish his notes to the Wiki. But at the same time i have to ask out loud: why are these instructions buried 5 levels deep in an atlassian wiki, and apparently beyond the field of vision of google’s searchbots?

Always bear in mind that I upgraded Tutor from Koa and then to Lilac to Maple to Nutmeg.

You will need to install the proper Tutor version for Lilac.
And then run these commands,

You will have to do something similar when moving to Maple and Nutmeg. You could be missing some of the steps taken by the tutor local upgrade commands.

@sambapete , confirming that this solved my problem. Thank you!!!

Note however that the actual technical steps are convoluted. Additionally, I’m unclear about the necessity of running this procedure version-by-version. The earliest usable tutor version that i’ve found is 12.2.0 which installs Lilac.3.

@lpm0073, these were the steps Migrating from Native Install to Tutor (juniper -> tutor 10.x) - #11 by misilot - Tutor - Overhang.IO I used when I migrated from a native juniper to tutor.

thanks @misilot . I’ll work on pros for a more generalized upgrade. Your link above for example includes additional steps that are important (and unintuitive) for performing a complete upgrade. It’ll be good to publish a comprehensive future-proof guide with the complete procedure.

In all fairness @lpm0073, and to give him credits where credits are due, the instructions I gave you from @BbrSofiane were originally taken from @misilot post.

It’ll be good to publish a comprehensive future-proof guide with the complete procedure.

@lpm0073 if you are able to take the initiative to do the documentation / writing up, I’m sure I can help you find an appropriate (top-level and searchable!) place for these instructions.